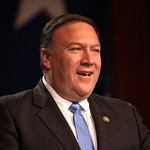 Mike Pompeo
(Image by Gage Skidmore)   Details   DMCA
North Korean officials didn’t show up for a planned meeting with U.S. counterparts to discuss returning the remains of American war dead, in the latest sign of tensions between the two sides. The meeting was expected to be the first working-level talks between the two sides since Pompeo’s visit to Pyongyang ended Saturday with North Korea denouncing the U.S.’s “unilateral and gangster-like demand for denuclearization.”
Read the rest of the story HERE: