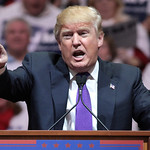 Donald Trump
(Image by Gage Skidmore)   Details   DMCA
Donald Trump has faced an unusual amount of criticism from foreign leaders — in large part because of his combative tone and unorthodox policy suggestions. This week, however, he found an unlikely international voice of support — in North Korean state media. State outlet DPRK Today published an editorial Tuesday that called the business mogul a "wise politician" and said he could be good for North Korea. The author of the editorial also dismissed Hillary Clinton, Trump's likely Democratic rival in the presidential race, calling her "dull" and saying that she hopes to use the "Iranian model to resolve nuclear issues on the Korean Peninsula."
Read the rest of the story HERE: