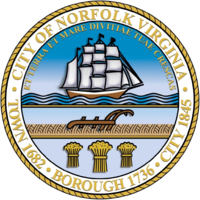 Norfolk, Virginia is claiming in a lawsuit that its free speech rights are being violated because a state law won’t let it remove a Confederate monument from its downtown area. This lawsuit employs a relatively novel and untested legal strategy in the federal court system regarding whether cities have free speech rights. The city filed suit Monday in a U.S. District Court which targets a Virginia law that prevents the removal of war memorials. The suit claims infringement of the First Amendment because the city is being forced to project a message it no longer supports. UVA law professor Richard Schragger said the lawsuit makes a relatively “novel legal claim that hasn’t been tested in federal court yet." (Ed Note: In 2017 the  City Council voted to move the monument to a local cemetery in the wake of the fatal domestic terrorism in Charlottesville, VA.)

STAY IN THE KNOW
If you've enjoyed this, sign up for our daily or weekly newsletter to get lots of great progressive content.
Series: "Norfolk / Tidewater Area Virginia"