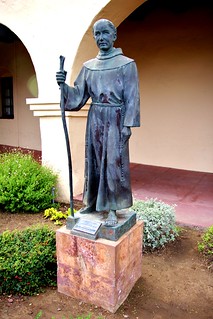 Saint or monster? Junipero Serra's canonization of Junipero Serra in September has many people upset, and the furor isn't confined to American Indians and Hispanics. Serra, who spearheaded the implementation of 21 missions in and around the Baja area of California, used conquistadors armed with swords, spears and whips to maintain order and to get the Native people to do their work in a forced labor atmosphere of hegemony. Is this a saintly way of handing things? Well, in recent weeks statues of Serra in the Baja area, at these missions, have been desecrated, along with buildings and tombs. A Satanic organization even "demonized" Father Serra in October. Wow! What a canonization! - From "Daily Kos".