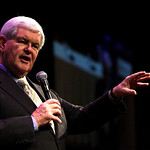 Former House Speaker Newt Gingrich, a Donald Trump supporter and adviser, said on Sunday that FBI Director James Comey “caved” when he announced to lawmakers that the agency is not changing its conclusion on whether to indict Hillary Clinton over her private email server. “Comey must be under enormous political pressure to cave like this and announce something he can’t possibly know,” Gingrich tweeted Sunday afternoon immediately after the announcement. Democrats and Republicans had demanded for days that Comey provide more information after his initial vague letter, sent just 11 days before Election Day, said new emails were recovered with regard to the investigation of Clinton’s private server.