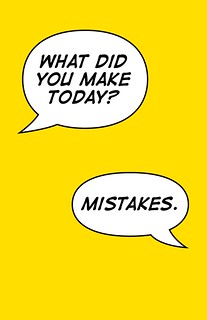 .What did you make today?. .Mistakes.
(Image by mugwumpian)   Details   DMCA

"While Shiite-led Iran is on the terrorism list because it supports  Hezbollah & Hamas, it IS FIGHTING ISIS, in Iraq. BUT, Saudi Arabia, home of 15 of the 19 hijackers on Sept. 11, was not included in the new US travel rules, nor was Pakistan, a caldron of jihadist groups, nor Turkey, a well-known transit point for ISIS fighters.  Restricting visas for people who travel to Iraq and Syria makes sense, given that both are home turf for the Islamic State, and Sudan is a transit point for extremists heading to Syria and Iraq." Iran’s inclusion is "another attempt by Congress to sabotage the nuclear deal, which most lawmakers opposed...It would be folly for the US and other major powers to refuse to lift sanctions as promised under the nuclear deal, which 36 GOP senators have demanded. That would kill the deal, which, Iranian and American officials say, Tehran is starting to carry out."