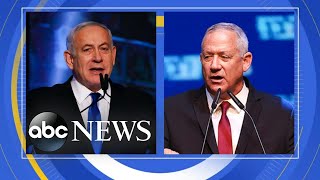 Benjamin Netanyahu may fall short in Israel election.
(Image by YouTube, Channel: ABC News)   Details   DMCA
Benjamin Netanyahu, who has been Israel’s dominant leader for the past decade, suffered a crippling and perhaps politically mortal blow in Tuesday’s elections — and for all the right reasons. Following wild promises by Mr. Netanyahu to annex large parts of the West Bank, the first-place finisher in the preliminary vote count was the centrist Blue and White party, which opposes annexation or other steps that would preclude the creation of a Palestinian state. Netanyahu might yet find a way to stay on as prime minister. But if Israel’s other parties stick to their campaign positions, a leader who has polarized his country and damaged Israel’s standing in the United States could finally be forced from office — or, at least, prevented from following through on his most extreme promises.
Read the rest of the story HERE: