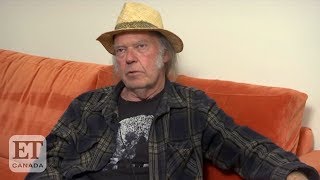 The letter slams Trump for using one of Young’s songs. “Every time ‘Keep on Rockin’ in the Free World’ is played at your rallies, I hope you hear my voice,  a tax-paying U.S. citizen who does not support you.”  Young explains his support for Sanders.

“One of your opponents has the answers I like. He is aiming at preserving our children’s future directly. He is not popular with the democratic establishment because unlike all the other candidates, he is not pandering to the industries accelerating Earth’s Climate Disaster, the end of the world as we know it. He is truly fighting for the USA. We are going to vote you out and Make America Great Again,”

Young’s “Rockin in’ the Free World” was played as Mr. Trump descended a Trump Tower elevator moments before declaring his candidacy in June 2015, prompting the singer to issue a statement within hours objecting to its usage.