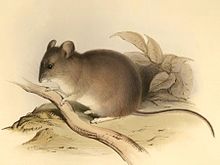 A new expedition to the Andes has found mice living at even higher elevations than thought—making them the world's highest-dwelling mammals.

This still falls a bit short of the record lowest living animal, a snailfish found at 26,722 feet below sea level.

It's starting to look like the only limits to life are the extent of water down below sea level or land up above it, which has major implications for the prevalence of life on other worlds, particularly in a week when Venus was found to have signs of life in its clouds.

And this is before even considering extremophiles which live in human-poison hot springs or under 1,000s of feet of ground.