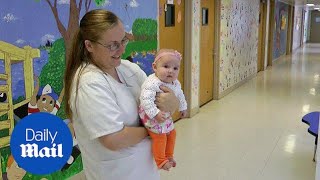 For 3 years, Stephanie Baker’s sons knew her as a prisoner in a jumpsuit. They could visit her at Springer Correctional Center, passing through concrete walls and barbed fences every few months. It was difficult for their maternal great-grandparents, with whom they lived in Roswell NM to make the f5 hour drive to the prison.

Her release had been delayed so many times that she no longer discussed possible dates with them.  So when she opened their front door in the early evening of Sept. 26, the sight of her was almost too much for them to bear. “Mom! Mom! Mom!” the youngest yelled, jumping into her arms. The oldest began to cry.

By Baker’s own admission, she had never been a good mother. Before she went to prison in 2016, her priority was meth – scoring it, selling it, smoking it. She would leave the two older boys, then 8 and 6, in the care of her grandparents, both in their late 60s.