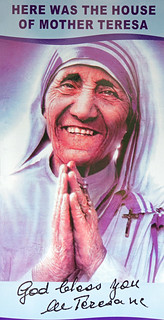 Macedonia-02787
(Image by archer10 (Dennis) (62M Views))   Details   DMCA
Mother Teresa, who dedicated her life to helping India's poor, will be made a saint in the Roman Catholic Church, the Vatican said Friday. She will likely be canonized in September to coincide with the 19th anniversary of her death and Pope Francis' Holy Year of Mercy, according to an Italian Catholic newspaper report. The pontiff marked his 79th birthday on Thursday by approving a decree that the nun had performed a second miracle 11 years after her death, the Vatican confirmed in a statement. Born Agnes Gonxha Bojaxhiu in Skopje, Macedonia, Mother Teresa died on Sept. 5, 1997, aged 87.
Read the rest of the story HERE: