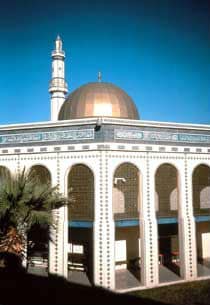 Letters threatening that President-elect Donald Trump will do to Muslims what Adolf Hitler “did to the Jews” were sent to three California mosques last week, according to the Council on Islamic-American Relations, or CAIR. The handwritten letter, which referred to Muslims as “children of Satan,” was mailed to Islamic centers in San Jose in Northern California and Long Beach and Pomona in Southern California. It called Trump the “new sherriff [sic] in town” who will “cleanse America and make it shine again” by eradicating the country’s Muslim population. “You Muslims are a vile and filthy people. Your mothers are whores and your fathers are dogs,” the letter states. “You are evil. You worship the devil. But, your day of reckoning has arrived.” The letter went on to say that Muslims “would be wise to pack your bags and get out of Dodge.”