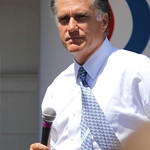 Mitt Romney
(Image by cornstalker)   Details   DMCA
The right-wing political action committee CPAC disinvited Sen. Mitt Romney (R-UT) from any involvement in their conference. Romney joined with Sen. Susan Collins (R-ME) in voting to support witnesses in the impeachment trial of President Donald Trump. Like a child storming out of the sandbox with their toys, CPAC attacked the former Republican presidential candidate who was elected to the U.S. Senate in 2018 with over 62 percent of the vote. Romney hasn’t responded to the comment, though he isn’t likely to care given his strong support in his home state.
Read the rest of the story HERE: