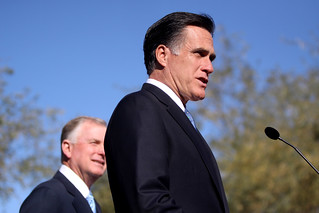 Mitt Romney & Dan Quayle
(Image by Gage Skidmore)   Details   DMCA
In spite of his insistence that he will not run, Mitt Romney is being courted this week by a leading conservative commentator to reconsider and jump into the volatile 2016 presidential race as an independent candidate. William Kristol, the longtime editor of the Weekly Standard magazine and a leading voice on the right, met privately with the 2012 nominee on Thursday afternoon to discuss the possibility of launching an independent bid, potentially with Romney as its standard-bearer. “He came pretty close to being elected president, so I thought he may consider doing it, especially since he has been very forthright in explaining why Donald Trump and Hillary Clinton should not be president of the United States,” Kristol said in a phone interview Friday, during which he confirmed that he and Romney had a “little meeting in Washington.”
Read the rest of the story HERE: