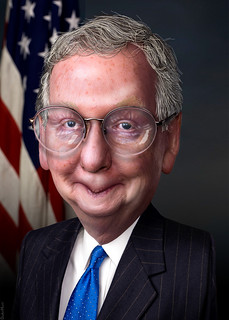 Mitch McConnell - Caricature
(Image by DonkeyHotey)   Details   DMCA
Senate Majority Leader Mitch McConnell said the United States Congress would likely not muster the two-thirds majority needed to reject the recent accord over Iran’s nuclear program. “He can win by getting one-third plus one of either house,” McConnell said to a group in his home state of Kentucky, referring to Obama, according to the Associated Press. “So he’s still got a great likelihood of success.” McConnell expects every Republican senator to oppose the deal. So far, only one Democrat, New York Sen. Chuck Schumer, has committed to voting against it. Schumer is in line to lead Senate Democrats in 2017.
Read the rest of the story HERE: