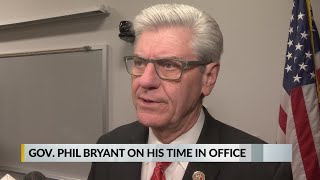 "I intend to work for Cindy Hyde Smith as if the fate of America depended on her single election,” Gov. Phil Bryant tweeted. “If Mike Espy and the liberal Democrats gain the Senate we will take that first step into a thousand years of darkness.”

During his first campaign against Hyde-Smith, a video surfaced showing her praising a supporter by saying she’d attend a “public hanging” if he invited her, the AP reported.

Espy used that as ammo, saying, “We can’t continue the change we need if we have a senator who openly laughs about public hangings and makes statements supporting voter suppression,” the AP reported.

Espy added that Hyde-Smith “is hurting Mississippi — our progress and our reputation — and we simply must replace her."