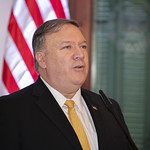 Secretary Mike Pompeo
(Image by U.S. Department of State)   Details   DMCA
US Secretary of State Michael Pompeo, who is a former CIA director, has admitted to an audience that the American spy agency trains employees to “lie, cheat and steal.” “I was a CIA director, we lied, we cheated we stole… like, we had entire training courses. It reminds you of the glory of the American experiment,” Pompeo recently told an audience in College Station, Texas. Pompeo’s stunning admission comes as he and US National Security Adviser John Bolton have vowed to strangle Iran and cut off all oil exports, accusing the Islamic Republic of trying to develop nuclear weapons and missiles.
Read the rest of the story HERE: