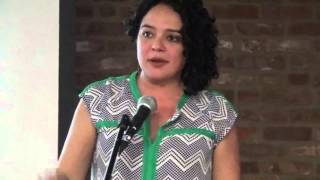 Marisa Franco: Too Much Climbing & Not Enough Lifting Introducing Mijente: a new political home for Latinx & Chicanx organizing in the US mijente.net.
(Image by YouTube, Channel: Mijente)   Details   DMCA

The organization will use social media, 1,000 members and 300,000+ email list to mobilize Latinos to vote and hit the pavement for Sanders in Nevada and other states. Cofounder Marisa Franco said members picked Sanders after a lengthy process that included sit-downs with multiple candidates. In January, its members voted on four options: endorsing Sanders, Warren, both of them, or no endorsement at all. In the end, 70 percent of its members voted to endorse Sanders.

Sanders’ economic justice platform and moratorium on deportations were key to Mijente’s members in addition to Sanders' exhaustive outreach to Latinos this cycle. “Something that's very appealing to people is his consistency and the concept of palabra; what that means in our community is giving people your ‘word.’ We're not picking a savior, we're picking our target. We didn’t pick him to be the fixer of all things.”