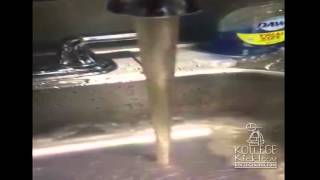 Flint, Michigan Contaminated Water
(Image by KollegeKidd.com, Channel: KollegeKidd.com)   Details   DMCA
Blame for the tainted water in Flint, Mich., has engulfed federal regulators, the governor, state employees and city officials. On Wednesday, the Michigan attorney general took sharp aim elsewhere: the private sector. Bill Schuette, the attorney general, announced a lawsuit against two companies that he said imperiled public health in Flint and contributed to the city’s lead-poisoned drinking water. The companies, Veolia North America and Lockwood, Andrews & Newnam, or LAN, were awarded contracts to advise the city about using the Flint River as its drinking water source. But, Mr. Schuette said, each failed to sound alarms about lead contamination, overlooked obvious problems and were complicit in the series of events that caused lead to leach from pipes and poison children.
Read the rest of the story HERE: