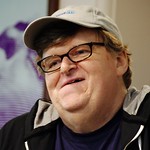 Michael Moore
(Image by david_shankbone)   Details   DMCA
Despite polls predicting Clinton to win by a large margin, Moore is far from confident. "I live beyond the wall where the White Walkers are," he said. "I could just tell on the streets that there's no enthusiasm [for her] whatsoever." In his first interview since the release of TrumpLand, Moore explains why he doesn't trust polls, why society should treat Trump like a pedophile and how this election is nothing short of a referendum on white privilege itself. "'I need to stop Trump.' That's a dangerous way to have your candidate win, when you're not asking people to vote for her because of her. They're expecting her to win because of people's fear of him. And one thing that I think we've learned in this post-9/11 world is that politicians manipulating the public with fear is never a good thing. Even if it's being done on our side, I don't think it's a good thing."
Read the rest of the story HERE: