Among many other accusations, Cohen alleges that Trump worked to get close to Russian President Vladimir Putin and “his coterie of corrupt billionaire oligarchs,” according to an excerpt released Thursday from the book, entitled “Disloyal, A Memoir."

“Trump had colluded with the Russians, but not in the sophisticated ways imagined by his detractors. I also knew that the Mueller investigation was not a witch-hunt,” Cohen wrote, although he did not provide specifics about the alleged collusion in the excerpt. “Trump had cheated in the election, with Russian connivance, as you will discover in these pages, because doing anything — and I mean anything — to ‘win’ has always been his business model and way of life.” 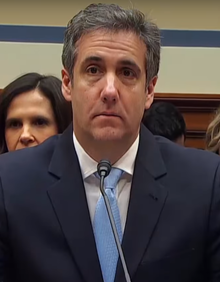 Michael Cohen in 2019.
(Image by (From Wikimedia) The Circus, Author: The Circus)   Details   Source   DMCA
Read the rest of the story HERE: