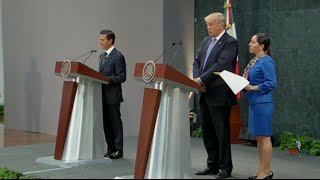 Following their meeting on Wednesday, Mexico’s president, Enrique Pena Nieto, insisted he told Donald Trump, during their meeting in Mexico City, that Mexico would not pay for a border wall between their two countries. “At the start of the conversation with Donald Trump, I made clear that Mexico will not pay for the wall,” Nieto tweeted. A spokesman for the Mexican president later told the Guardian that there was no discussion of paying for the wall because Trump did not respond to Nieto’s statement. “The president told him clearly and the matter was not discussed further.” Trump had told reporters after the meeting that while the pair had discussed a border wall, the topic of who would pay for it did not come up. “We didn’t discuss payment of the wall. That’ll be for a later date,” Trump said.