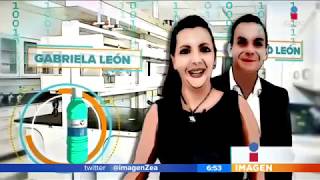 Gabriela León Gutiérrez, a Mexican biochemical engineer, has developed a full-spectrum nano-biomolecule that can stop the coronavirus in its tracks, literally.

Nbelyax, the nanoparticle-based disinfection and sterilization product she developed, is capable of "annihilating all types of viruses, bacteria, fungi, germs and spores," by not just breaking down the cell, but destroying the genetic material itself, reports The Yucatan Times.

Gabriela teamed up with her brother, Sergio, an industrial engineer, to found their own company, Gresmex, to develop the killer nano-biomolecule.

The team's powerful nanoparticle, Nbelyax, is non-toxic, environmentally friendly, and has already proven itself against Ebola, helping stop deadly outbreaks in parts of Africa. Gresmex, now one of Mexico's leading nanotech firms, was named "one of the 100 firms that will save humanity" by the UN, according to Mexico News Daily. They are currently working to develop a product that stops the spread of HIV.