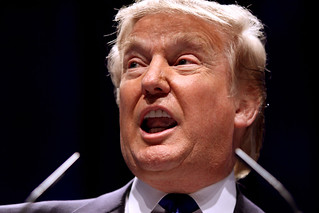 Donald Trump
(Image by Gage Skidmore)   Details   DMCA
The madness has not been lost on the middle-of-the-road Republicans here, the folks who show up at rallies for Bush, Marco Rubio or John Kasich. Normally proud of the fact that their state picks presidents, as they like to say, this is now a group filled with existential dread. There are strange unwritten rules that Republican candidates and their surrogates have to play by. They can call Trump — a twice-divorced former Democrat who, at the debate, offered praise for both Planned Parenthood and eminent domain — a fake Republican. They can say he’s dangerous, or, as Sen. Lindsey Graham (R-S.C.) put it after the debate, they can call him a “nutjob.”
Read the rest of the story HERE: