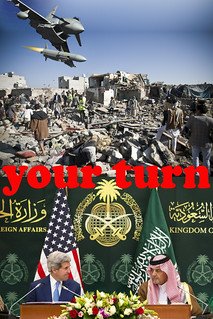 Saudi Arabia is currently engaged in a proxy war with Iran, who Riyadh blames,inaccurately, for the rise to power of the Houthis in Yemen and setbacks to the kingdom’s agenda in Syria, leading to a bombing campaign and embargo on crucial resources that began in April. UNICEF reported in October that 537,000 Yemeni children were at risk of severe malnutrition nationwide, while Alexi O’Brien, reporting for Al-Jazeera in September, noted that the United Nations warned that 96,000 children were “starving and close to death” in the port city of al-Hodeidah, and an additional 8,000 children faced starvation in Aden in 2016.  In July, Oxfam reported that the number of starving people in Yemen had topped 6 million — nearly half the country’s population of 13 million.