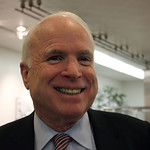 Sen. John McCain, R-Ariz.
(Image by Medill DC)   Details   DMCA
Sen. John McCain's absence from the Senate as he recovers from surgery for a blood clot has led the GOP leadership to postpone consideration of healthcare legislation that is already on the brink. Senate Majority Leader Mitch McConnell said Saturday night that he was deferring action on the measure as McCain recovers at his home in Arizona. Surgeons in Phoenix removed a blood clot from above McCain's left eye Friday. The 80-year-old Republican senator was advised by doctors to remain in Arizona next week, his office said. "While John is recovering, the Senate will continue our work on legislative items and nominations, and will defer consideration of the Better Care Act," McConnell said in a statement.
Read the rest of the story HERE: