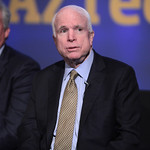 Republican Sen. John McCain issued a fiery warning to President-elect Donald Trump on the subject of torture Saturday. “I don’t give a damn what the president of the United States wants to do. We will not waterboard,” McCain told an audience at the annual Halifax International Security Forum. “We will not torture people … It doesn’t work.” At a Republican primary debate in February, Trump vowed that he would “bring back a hell of a lot worse than waterboarding.” On Saturday, McCain reminded the audience that torture remains illegal under the Geneva Conventions and was also banned by Congress last year.