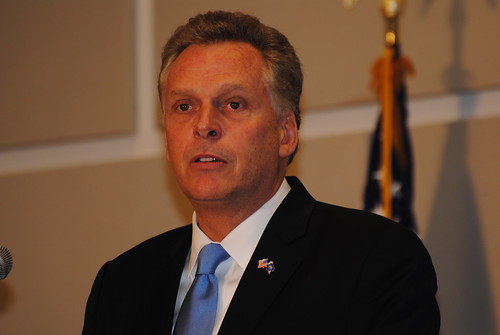 Virginia Governor Terry McAuliffe
(Image by mdfriendofhillary)   Details   DMCA
One month after the state Supreme Court threw out his blanket clemency order, Gov. Terry McAuliffe announced Monday that he has individually restored voting rights to 13,000 felons and is working on doing the same for a total of about 200,000. McAuliffe said he had found a way to comply with the court’s order while addressing “an issue of basic justice. I personally believe in the power of second chances and in the dignity and worth of every single human being,” he said beside a civil rights monument on Capitol Square. “These individuals are gainfully employed. They send their children and their grandchildren to our schools. They shop at our grocery stores and they pay taxes. And I am not content to condemn them for eternity as inferior, second-class citizens.”
Read the rest of the story HERE: