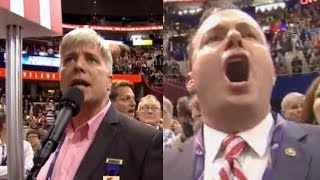 Chaos erupts as delegates demand a 'roll call' vote on Republican National Convention
(Image by Max Rid, Channel: Max Rid)   Details   DMCA
The GOP ignored a group seeking to change the rules for the Republican National Convention’s presidential nominating process, which said it has enough signatures to force a vote on the matter. A majority of delegates from 10 states sought to demand a floor vote over convention rules on Monday afternoon, according to Delegates Unbound, the group organizing the rebellion. There were three major rule changes that the group sought, the Washington Examiner reported: Unbinding delegates, creating incentives for states to hold closed primaries by awarding a delegate bonus, and undoing a new rule that gives party leadership total control over information about and among future rules committees.
Read the rest of the story HERE: