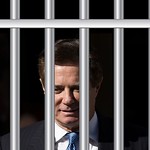 Paul Manafort
(Image by Mike Licht, NotionsCapital.com)   Details   DMCA
A search warrant application unsealed on Wednesday revealed closer links than previously known between President Donald Trump’s former campaign manager Paul Manafort and a Russian oligarch with close ties to the Kremlin. In an affidavit attached to the July 2017 application, an FBI agent said he had reviewed tax returns for a company controlled by Manafort and his wife that showed a $10 million loan from a Russian lender identified as Oleg Deripaska.
Read the rest of the story HERE: