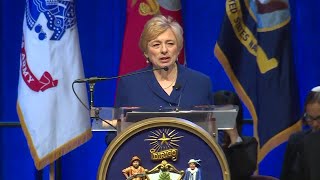 Janet Mills delivers inaugural address Janet Mills made history Wednesday when she was sworn in as the state's 75th governor and the first woman to ever hold that position. Subscribe to WMTW on ...
(Image by YouTube, Channel: WMTW-TV)   Details   DMCA

The law requires ISPs to get permission before any data could be sold to 3rd parties.

Maine's First Female Governor, Janet Mills: “The Internet is a powerful tool, and as it becomes increasingly intertwined with our lives, it is appropriate to take steps to protect the personal information of Maine people. With this law, Mainers can access the Internet with the knowledge that their information cannot be sold by their ISPs without their express approval.”

The law is modeled on a Federal Communications Commission rule, adopted under Obama but overturned by Trump's administration. Sponsor Sen. Shenna Bellows:  “Mainers need to be able to trust that the private data they send online won’t be sold or shared without their knowledge. This law makes Maine first and best in the nation in protecting consumer privacy online.”
Read the rest of the story HERE: