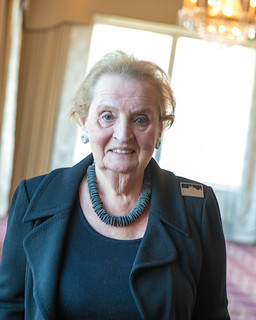 Madeleine Albright
(Image by commonwealth.club)   Details   DMCA
I HAVE spent much of my career as a diplomat. It is an occupation in which words and context matter a great deal. So one might assume I know better than to tell a large number of women to go to hell. But last Saturday, in the excitement of a campaign event for Hillary Clinton in New Hampshire, that is essentially what I did, when I delivered a line I have uttered a thousand times to applause, nodding heads and laughter: “There’s a special place in hell for women who don’t help each other.” It is a phrase I first used almost 25 years ago, when I was the United States ambassador to the United Nations and worked closely with the six other female U.N. ambassadors. But this time, to my surprise, it went viral. Voters must make an informed decision about whom they elect based on the issues that matter most to them, which of course are not limited to those of gender.
Read the rest of the story HERE: