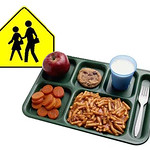 A lunchroom employee at Mascoma Valley Regional High School in New Hampshire was reportedly fired after she allowed a student with an $8 deficit on his school lunch tab to take his food with the promise of paying later. Bonnie Kimball has worked the register, sold drinks, and made smoothies and ice cream sundaes for the hundreds of kids at the high school. According to Kimball, on March 28, a student came to her register with some a la carte food on his tray. The student owed $8 in school lunch debt. Kimball sent him through, quietly telling him to remind his mother to put some money on his food card. The following day the student came in and paid up the account. Meanwhile, Kimball was fired. Kimball says she was doing what she had been told to do by the lunchroom manager.