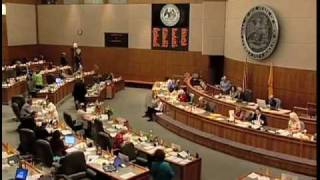 Know Your New Mexico Legislature New Mexicos citizens often wan to express their opinions and get involved in the legislative process, yet they dont know where to start. Visitors are always ...
(Image by YouTube, Channel: NewMexicoStateU)   Details   DMCA

This is a Legislature that delivered a moonshot,” the governor nearly shouted during a post-session press conference in her Cabinet Room on the fourth floor of the Roundhouse.

State lawmakers pumped an additional $500 million into the public schools budget and created a new early education department. Teachers and school administrators received a salary increase. And money for early childhood programs got a boost.

But bills that emphasized multicultural, bilingual education and strengthened the community school model – ideas that some lawmakers and education advocates consider transformational – seemed destined to die, stuck in legislative committees.

Then in the final hours of the 2019 legislative session, two of them were pulled from certain death and placed on the Senate floor Saturday morning.