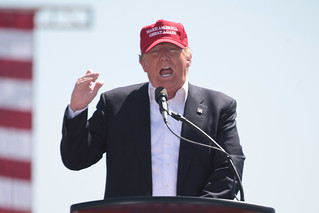 Donald Trump
(Image by Gage Skidmore)   Details   DMCA
Truly, Donald Trump knows nothing. He is more ignorant about policy than you can possibly imagine, even when you take into account the fact that he is more ignorant than you can possibly imagine. But his ignorance isn’t as unique as it may seem: In many ways, he’s just doing a clumsy job of channeling nonsense widely popular in his party, and to some extent in the chattering classes more generally. Last week the presumptive Republican presidential nominee — hard to believe, but there it is — finally revealed his plan to make America great again. Basically, it involves running the country like a failing casino: he could, he asserted, “make a deal” with creditors that would reduce the debt burden if his outlandish promises of economic growth don’t work out. The reaction from everyone who knows anything about finance or economics was a mix of amazed horror and horrified amazement.
Read the rest of the story HERE: