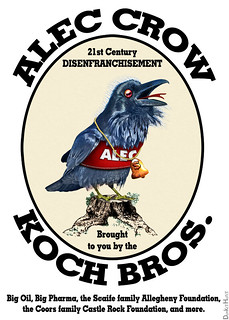 The Koch brothers launched a public relations blitz to show that they are good guys, 'The reality of the Koch political agenda is wildly different. It elevates a narrow set of issues relating to upper income taxes and environmental deregulation....''Americans for Prosperity, the biggest political organ in the sprawling network of groups financed by the Koch brothers, has never lobbied the federal government on criminal justice reform. Rather, disclosures from the group show that it has dedicated its efforts to repealing the estate tax , repealing a tax on medical device companies, and undermining Environmental Protection Agency regulations on industrial pollution. In Louisiana, a state with one of the highest rates of poverty in the nation,it has distributed a pledge to lawmakers, asking them to promise not to expand Medicaid, a program that provides healthcare to the poor.'