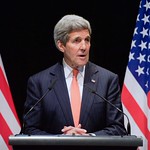 U.S. Secretary of State John Kerry said on Sunday it would be valuable for President-elect Donald Trump's transition team to seek State Department recommendations before contacting foreign leaders but that it had yet to do so. 'We have not been contacted before any of these conversations. We have not been requested to provide talking points,' Kerry said during a question-and-answer session at a think tank conference. 'I do think there’s a value, obviously on having at least the recommendations, whether you choose to follow them or not is a different issue, but I think it’s valuable to ask people who work the desk, and have worked it for a long period of time, their input on what’s the current state, is there some particular issue at the moment,' Kerry added.