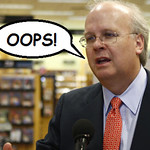 Karl Rove
(Image by Mike Licht, NotionsCapital.com)   Details   DMCA
Veteran Republican strategist Karl Rove on Monday called out President Donald Trump for “over the top” attacks on the media. In an interview on Fox News’ “America’s Newsroom,” the former senior adviser to President George W. Bush said Trump’s repeated bashing of the press as the “enemy of the people” “just grates on me. I grew up during the time of the Cold War,” said Rove, per Mediaite. “That is a phrase that was used by Stalin against the enemies of the Communist regime. I think the president would be well advised to tone down the rhetoric.”
Read the rest of the story HERE: