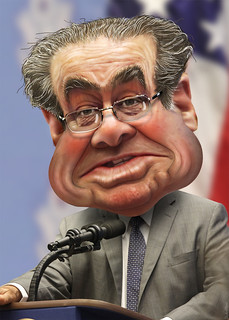 During oral arguments before the Supreme Court in the case of Fisher v. Texas, Justice Antonin Scalia made a plainly racist argument (emphasis ours): If Justice Scalia is not held accountable for his rhetoric — some of it blatantly racist and some of it representing coded, dog-whistle politics that sounds reasonable to some people but sends a very clear signal of hostility to minorities — that rhetoric will be validated and used to justify future discrimination.  The only official way for them to do this is with a formal congressional censure.  There are not many sanctions that can be placed on Supreme Court Justices. They are appointed for life and never have to answer to the American people. That is why it is so critical that our elected representatives in Congress speak clearly and with a single voice to show the American people that they find racism as deplorable as we do.