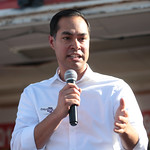 Julian Castro
(Image by Gage Skidmore)   Details   DMCA
Julián Castro, the former mayor of San Antonio who served as housing secretary under President Barack Obama, said Thursday he is suspending his candidacy and ending his effort to become the nation’s first Latino president. Castro’s exit also means he is the latest candidate of color to leave a Democratic field that had started out as historically diverse. Castro had announced his bid last January in San Antonio, saying that “no front-runners” are born in his neighborhood. His mother, Rosie, is a political activist, and his twin brother, Joaquin, is a U.S. congressman. He was the youngest member of Obama’s Cabinet when confirmed to lead the Department of Housing and Urban Development in 2014, and he was considered by Hillary Clinton as her running mate in 2016.
Read the rest of the story HERE: