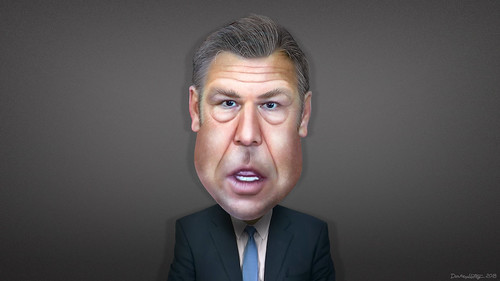 Kris Kobach - Caricature: in trouble again, for nothing else but successfully purging more than 1 million names of likely Democratic. voters from rolls in at least 27 states throughout the country.
(Image by DonkeyHotey)   Details   DMCA
Looks like KS SoS Kris ("KKK") Kobach's push to require proof of citizenship of all of his voting constituency just tanked. Praise the Lord. Given federal judge Julie Robinson's additional requirement that he "take more hours of continuing legal education after he was found in contempt and was frequently chided during the trial over missteps," I doubt that the appeal he promises will hold much water. Time will tell. If this reaches SCOTUS, it will be a disgrace, and another nail in democracy's coffin if he prevails then by the good-old 5-4.

And Mr. Kobach is running in the primaries for GOP nominee for KS governor. I hope that this debacle will work against him. Media, get busy! Time for some grassroots boots on the ground, too.