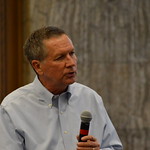 John Kasich
(Image by aj.hanson1)   Details   DMCA
On NBC’s “Meet the Press,” host Chuck Todd asked Kasich if Trump owes Obama an apology, saying that for a lot of people, questioning the birthplace of the first black president was “a dog whistle.” But Kasich dodged the questions. “You know, Chuck, yeah... Well, I don’t know about that,” he said, “Look, I’m not here on this trip to be talking about this issue. This is not where I want to make news.” After more than five years of fueling birther conspiracy theories that Obama was not born in the U.S., Trump flipped and admitted on Friday that the president was in fact born in America. The statement came just days after Trump once again refused to answer whether he believed Obama is an American citizen.
Read the rest of the story HERE: