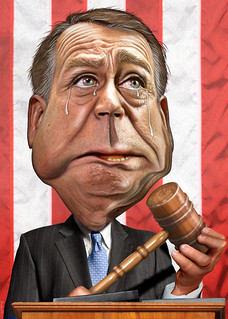 John Boehner - Caricature
(Image by DonkeyHotey)   Details   DMCA
Speaker John A. Boehner, under intense pressure from conservatives in his party, announced on Friday that he would resign one of the most powerful positions in government and give up his House seat at the end of October, as Congress moved to avert a government shutdown. Boehner, who was first elected to Congress in 1990, made the announcement in an emotional meeting with his fellow Republicans on Friday morning.
Read the rest of the story HERE: