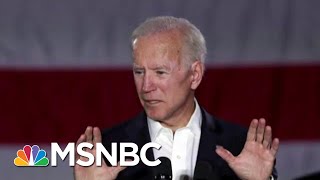 Joe Biden Could Be Poised To Make A Historic Move | Morning Joe | MSNBC As the country seems to stand by for an announcement from Joe Biden on his 2020 run, has he already sized up and chosen a VP running mate? The Morning ...
(Image by YouTube, Channel: MSNBC)   Details   DMCA

Forget, for a moment, his “blue-collar-uncle-at-the-end-of-the-bar persona.” Ignore also his recent, and ridiculous, claim to have the “most progressive record of anybody” running for president. Consider, instead, the sheer number of similarities he seems to have with the vanquished Democratic presidential candidate of 2016.

His supporters might not want you to remember this, but he has run for president twice already: In 1987, he quit the Democratic primary race within three months of announcing after being accused of plagiarizing parts of his speech. In 2008, he dropped out after coming fifth in the Iowa caucus, winning less than 1 percent of the vote.

Yet now, it seems, he and his supporters believe this serial loser is the only Democratic candidate able to win back white-working class voters from Trump and triumph in the 2020 presidential election?