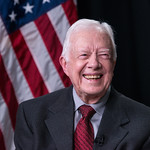 Jimmy Carter
(Image by LBJLibraryNow)   Details   DMCA
Former President Jimmy Carter is wading into the contentious Georgia governor’s race with a personal appeal to Republican candidate Brian Kemp: Resign as secretary of state to avoid damaging public confidence in the outcome of his hotly contested matchup with Democrat Stacey Abrams. The 94-year-old Carter’s request is the latest turn in a campaign whose closing month is being defined by charges of attempted voter suppression and countercharges of attempted voter fraud. Kemp has thus far dismissed Democratic demands that he step aside as Georgia’s chief elections officer. But Carter attempted to approach the matter less as a partisan who has endorsed Abrams and more as the former president who’s spent the decades since he left the Oval Office monitoring elections around the world.
Read the rest of the story HERE: