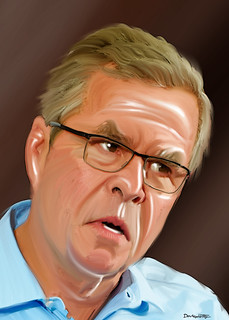 Jeb Bush - Painting
(Image by DonkeyHotey)   Details   DMCA
Republican presidential candidate Jeb Bush has largely refrained from publicly engaging with real estate mogul Donald Trump over the course of the 2016 presidential race. But in private, the former Florida governor reportedly has some choice words for his primary rival. Citing several anonymous sources close to Bush, Politico reported Thursday that Bush unloaded on the billionaire in a recent conversation with a GOP donor. “Seriously, what’s this guy’s problem?” Bush reportedly told the donor, adding that he thought Trump was “a buffoon,” a “clown” and an “a**hole.”
Read the rest of the story HERE: