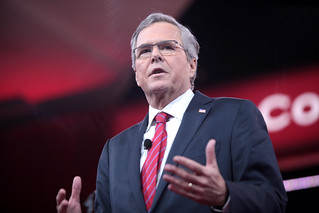 Jeb Bush
(Image by Gage Skidmore)   Details   DMCA
Jeb Bush dropped out of the presidential race on Saturday, ending a quest for the White House that started with a war chest of $100 million, a famous name and a promise of political civility, but ended with a humbling recognition: in 2016, none of it mattered. Mr. Bush’s campaign had rested on a set of assumptions that, one by one, turned out to be flatly incorrect: that the Republican primaries would turn on a record of accomplishment in government; that Mr. Bush’s cerebral and reserved style would be an asset; and that a country wary of dynasties would evaluate this member of the Bush family on his own merits. “We’ve had enough Bushes” his mother, Barbara Bush, observed prophetically before her son announced his candidacy last summer.
Read the rest of the story HERE: