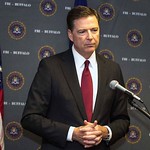 James Comey, the director of the Federal Bureau of Investigation, acting independently of Attorney General Loretta Lynch, sent a letter to Congress saying that the F.B.I. had discovered e-mails that were potentially relevant to the investigation of Hillary Clinton’s private server. Comey’s decision is a striking break with the policies of the Department of Justice, according to current and former federal legal officials. Comey, who is a Republican appointee of President Obama, has a reputation for integrity and independence, but his latest action is stirring an extraordinary level of concern among legal authorities, who see it as potentially affecting the outcome of the Presidential and congressional elections.