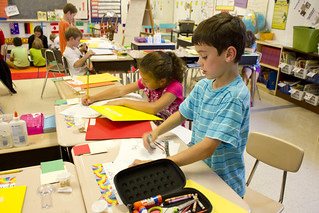 DON'T MISS THIS ONE: Jamaal A. Bowman is principal of a middle schoo in NYC knows the needs of his students, and knows that none of their needs is addressed by annual testing. Thus he takes issue with Shavar Jeffries, the exec. director of the pro-charter, pro-testing group called Democrats for Education Reform  and Education Reform Now. Bowman notes that Jeffries is sure about what to do to reform education but he never taught school. “What is most damaging about our test and punish system and why Jefferies’ support is baffling, is our continued overemphasis on English Language Arts and Math. As a result, Science, the arts, project based learning, have all been reduced or removed from the public school curriculum. Consequently, aesthetic learning, and other essential skills needed to truly compete in a “21st century global economy” have been greatly compromised.'