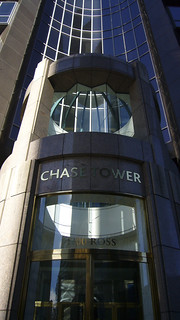 JPMorgan Chase Tower
(Image by Kent Wang)   Details   DMCA
JPMorgan Chase Co (JPM.N) has agreed to pay at least $125 million to settle probes by U.S. state and federal authorities that the bank sought to improperly collect and sell consumer credit card debt, according to people familiar with the matter. The settlement also includes about $50 million in restitution, the sources said. The nation's largest bank has been accused of relying on robo-signing and other discredited methods of going after consumers for debts they may not have owed and for providing inaccurate information to debt buyers. Robo-signing refers to signing documents in mass quantities without reviewing records.
Read the rest of the story HERE: